Well, somehow I pressed the publish button on my last post before I was finished.  So, now I'll write a bit about the cuff bracelet I made from Deryn Mentock's class.  The other day I was very tired and posted a brief blog about this cuff.  Now, if I can keep myself from pressing the publish button before I'm done maybe I'll get some info typed out.  At the end of post are some pictures of the cuff under construction. 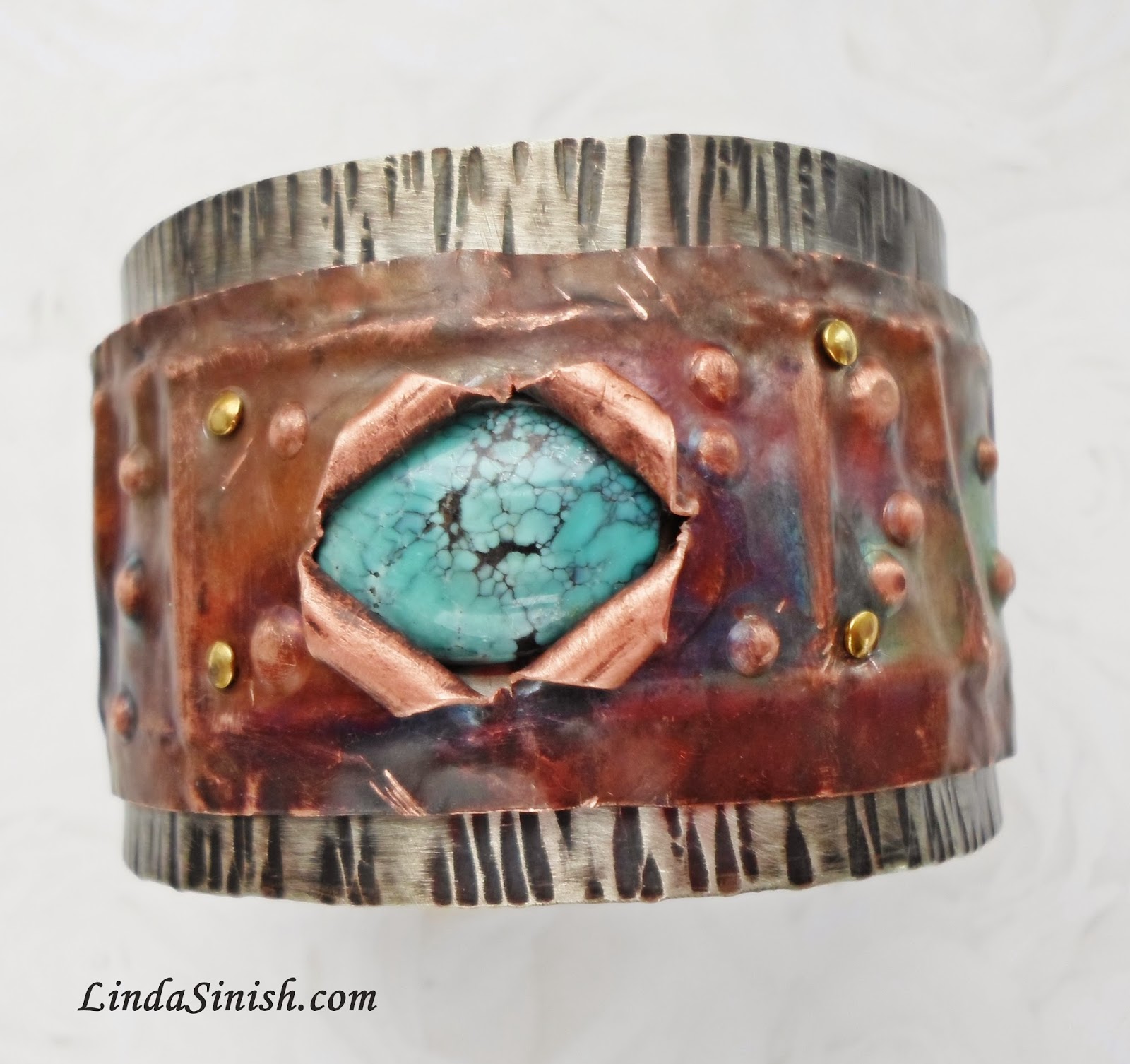 This is a better picture of the cuff I published the other day.  Today's lighting was helpful for a picture with clear colors.  The base cuff is made from nickle.  The entire edge was textured with a hammer with a sharp straight edge.  The patina from annealing in the torch added the contrasting colors. I used some sand paper to bring back the nickle color from the high spots.  All of this was done, before I attached the stone and the copper cuff. 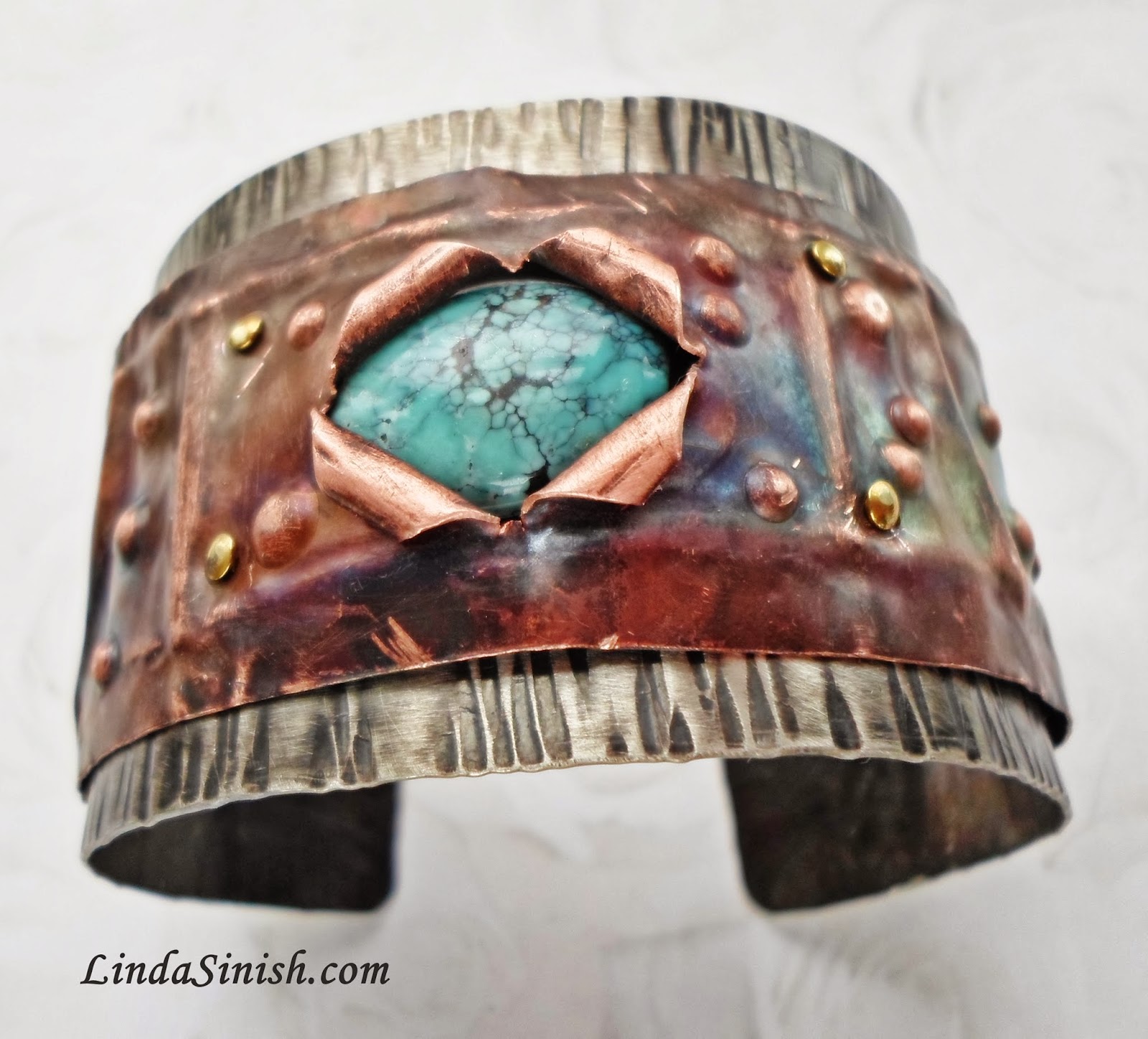 From this angle you can see the copper sheet top layer of the cuff.  It doesn't fit snugly.  Some might say it's okay and looks artsy.  I would like the copper edge to meet the nickle.  The stone in the center, which is under the copper, is the reason for the edge gap.  However, Deryn's wasn't like this, so the bottom line is I need more practice and need to tweak it.

See that turquoise stone in the center?  It's my 2nd stone.  The first cracked completely down the middle.  I was being careful not to apply any force, but either I wasn't careful enough or I suspect the turquoise had an inclusion in it and the crack was destiny.  As a result the 2nd stone isn't as large as the first.  I had already cut the center eruption area for the larger stone, so there is now a bit of an opening around parts of the 2nd stone.  No one will really notice, but me. 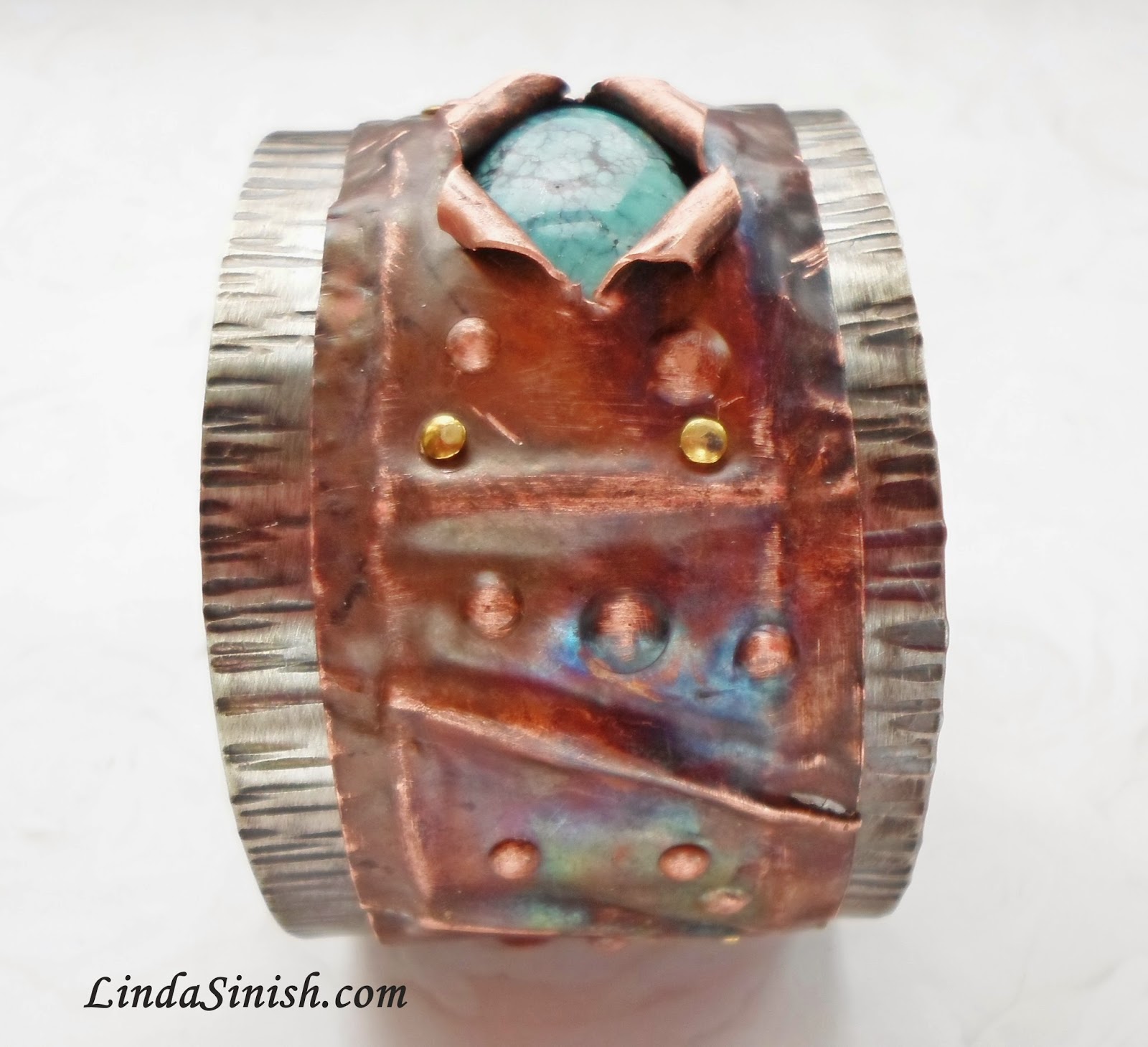 From this angle you can see the colors in the copper that were created from the annealing.  I'm not totally happy with my rivets, so I'll be pulling out the hammer to seat them a bit more. 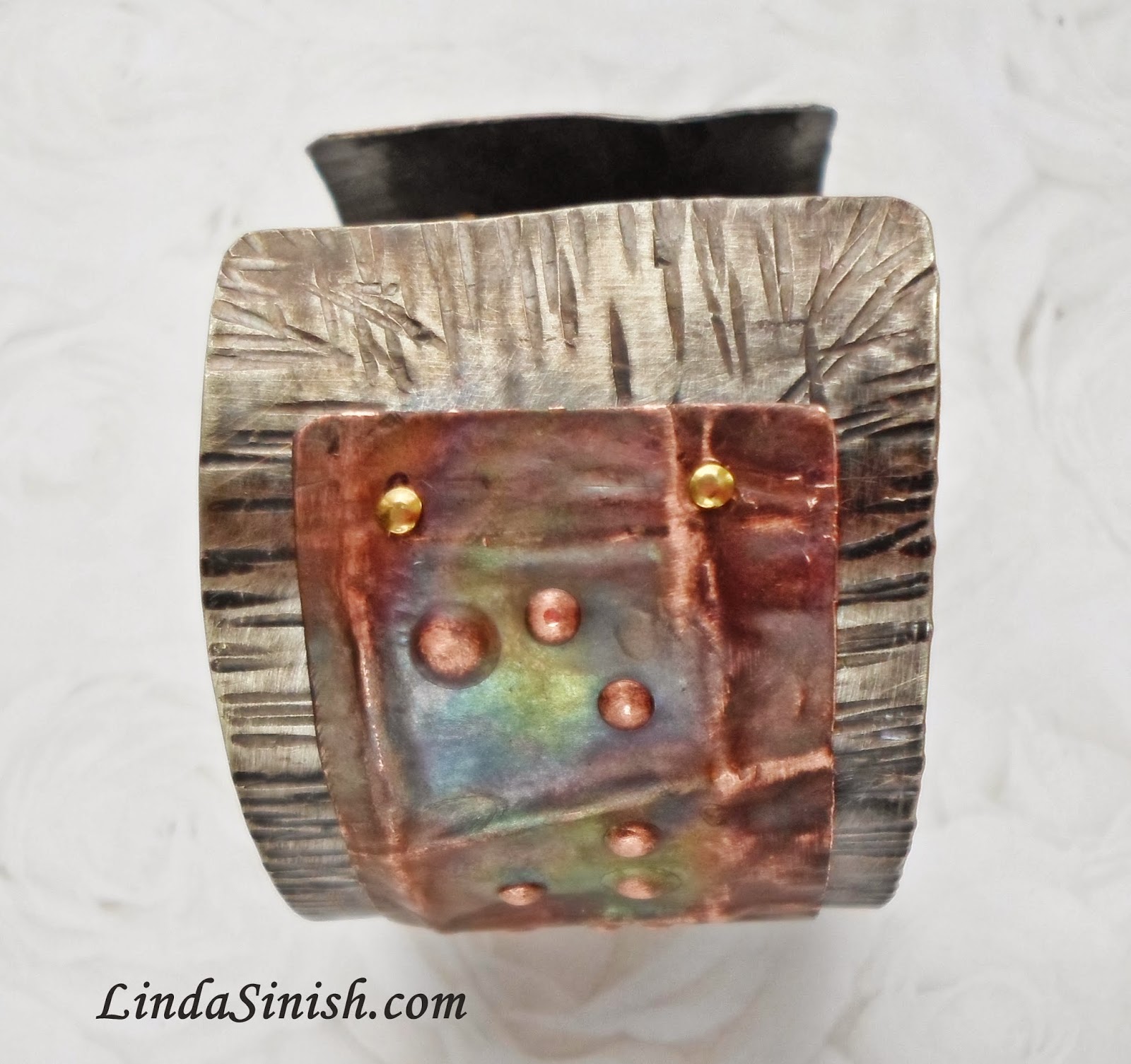 Here's a side view.  You can see that the edges of the nickle cuff aren't straight. Hmmmm The other side view with more waves in the nickel.  We used brass rivets, because they were supplied in the kit fee.  I personally would have chosen copper.  We also learned to fold form texture on the copper and we used various dimple pliers to add the 'bubbles'.

Here are a few pictures of this cuff under construction. 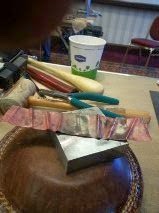 Here I have annealed the copper to soften.  The annealing added some color.  I then did some fold forming and had to anneal again, which added even more color. 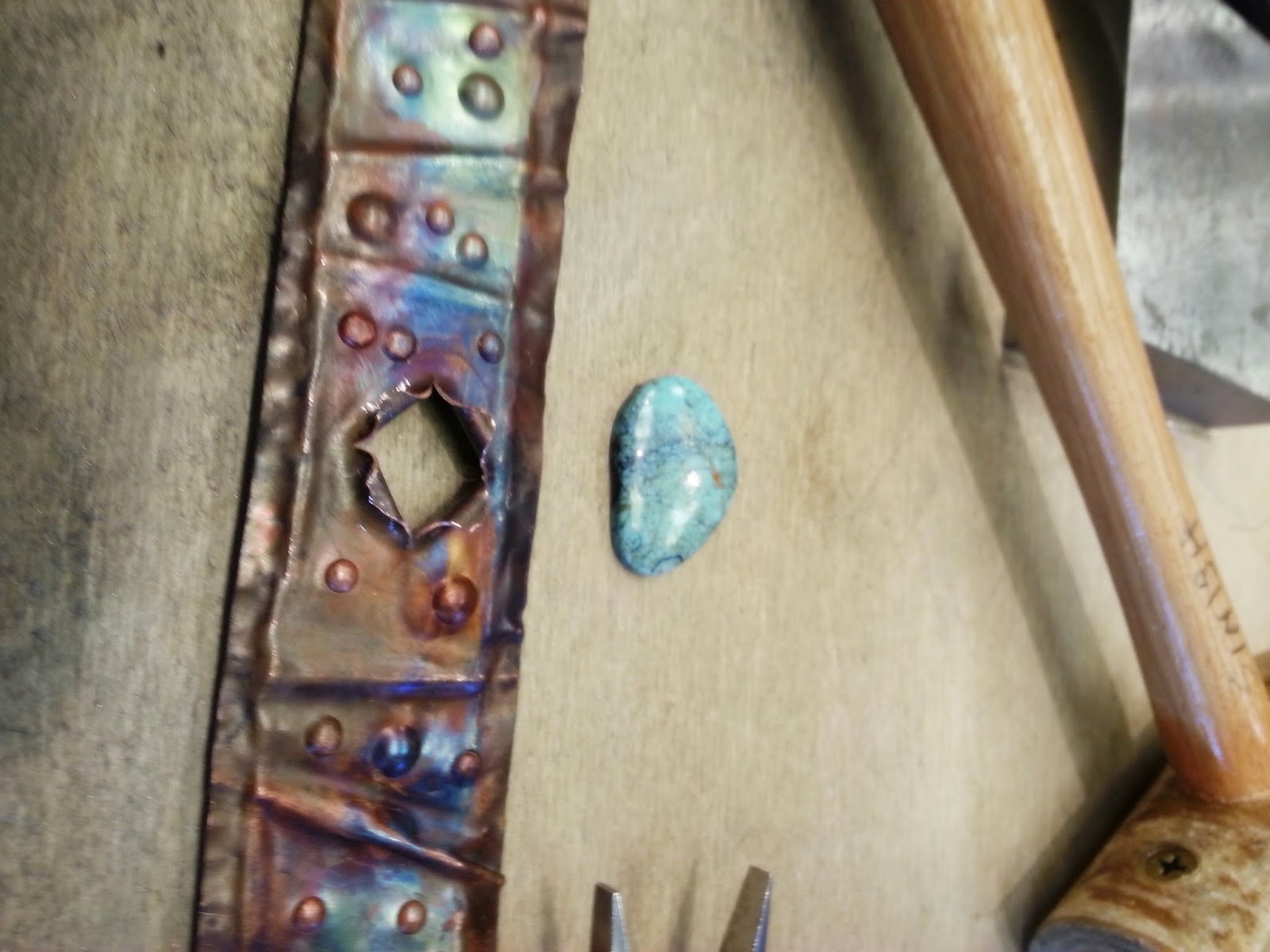 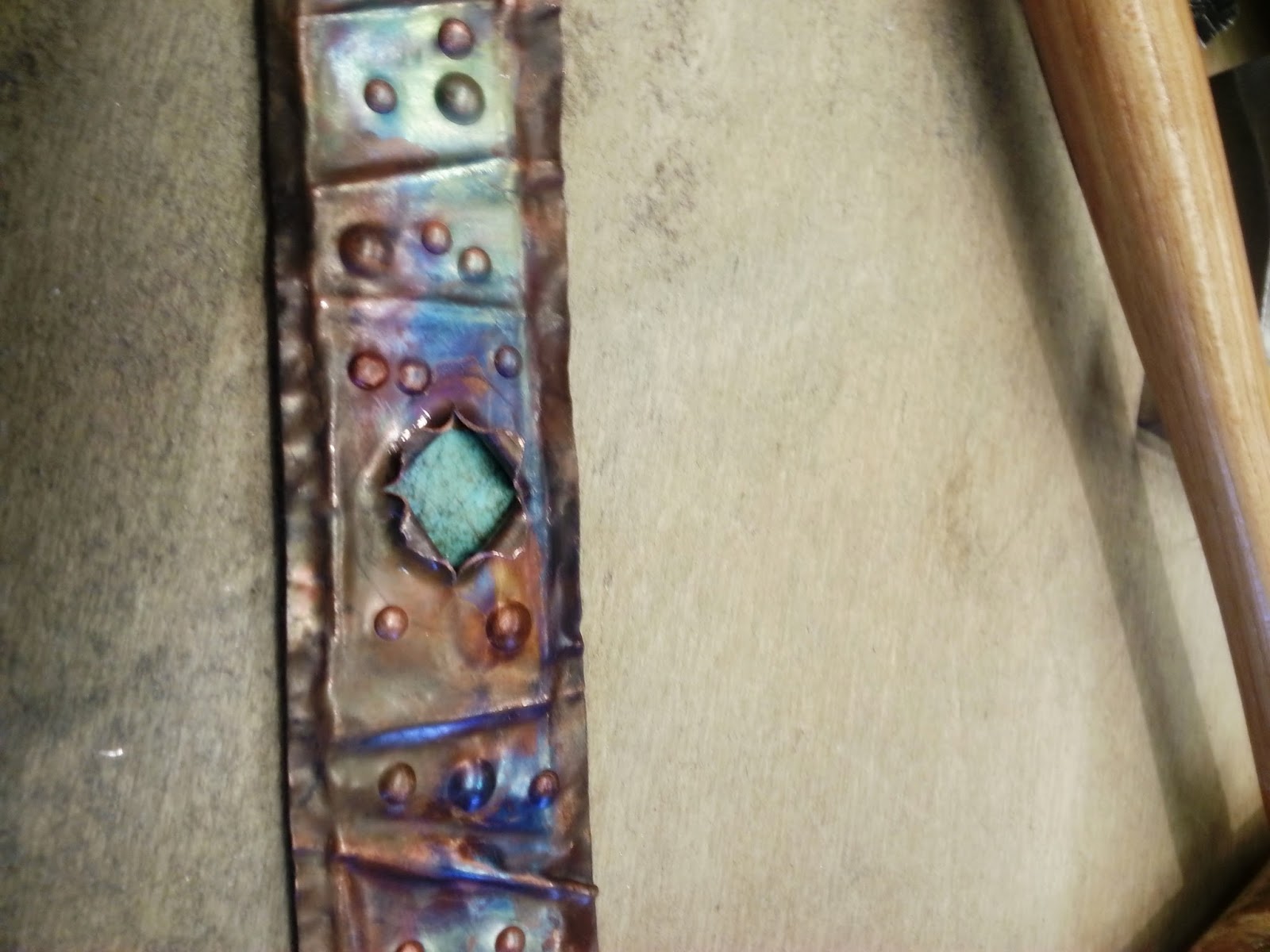 Here I am fitting the stone to the opening in the copper sheet.  Later, I removed the stone, shaped the copper in a cuff form and placed the copper over the nickle with the turquoise in between.

I hope this was of value.  I certainly learned a lot from this past weekend at ARTbliss and I met a lot of fantastic people.  The only thing I would change...I'll get a room at the hotel.  The drive was doable, but I was so exhausted from 2 days of continual metal technique.  I think a short elevator ride for a reasonable hotel fee is worth the time.

Thank you for visiting.  Have a joy filled and creative day. 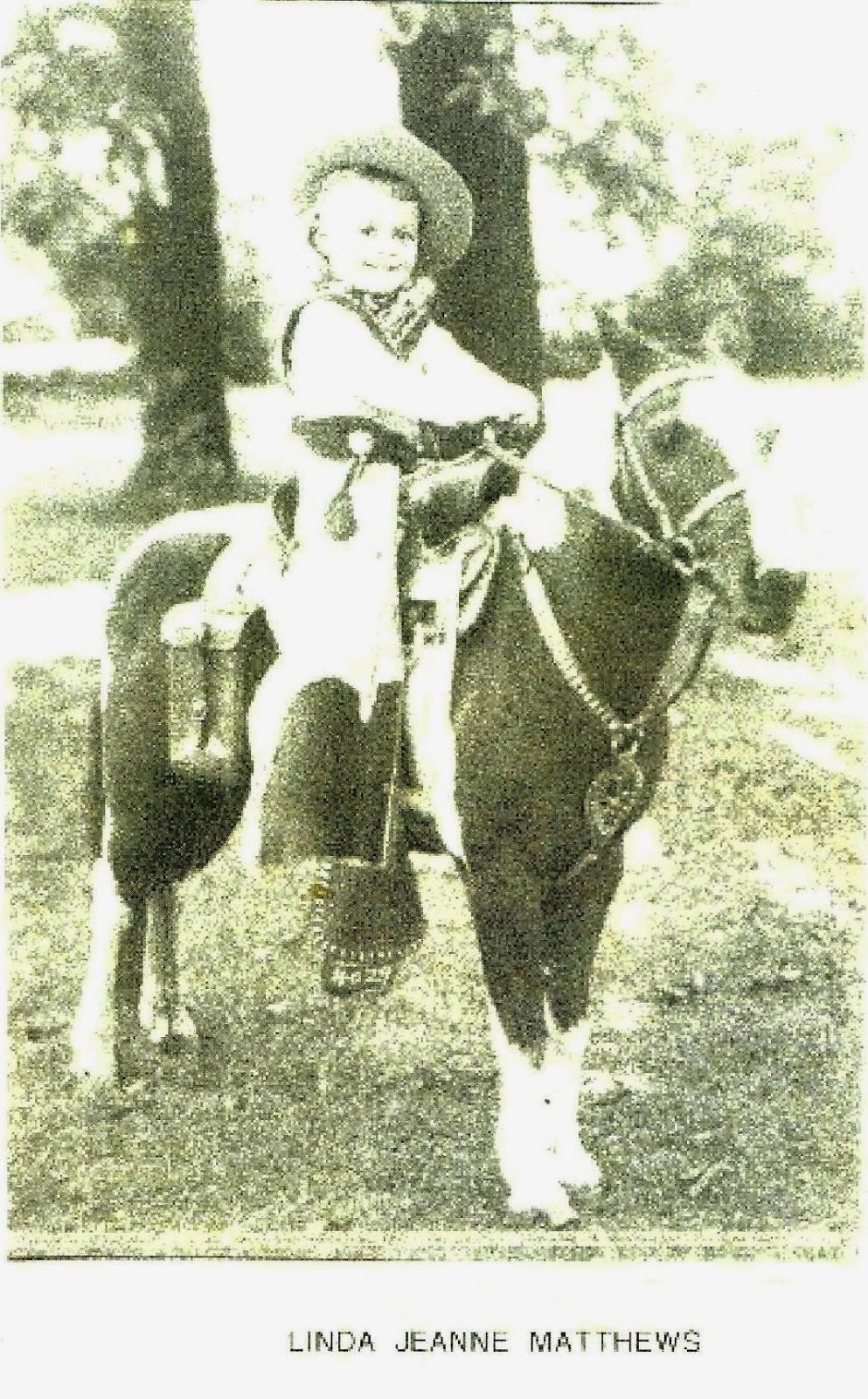 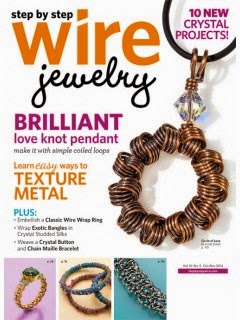 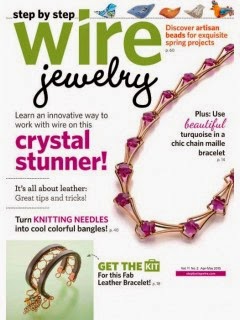 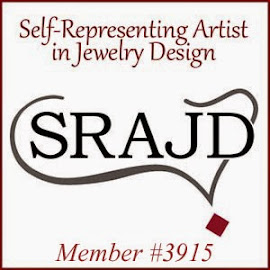 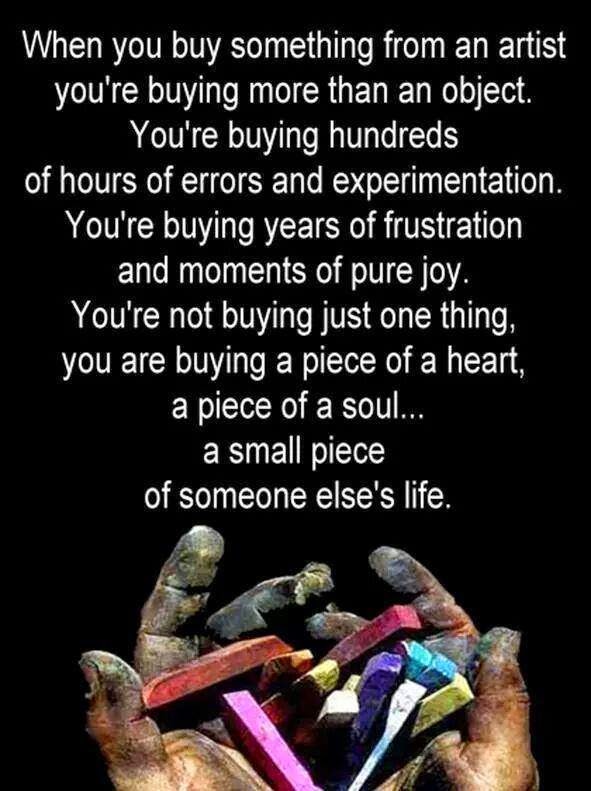 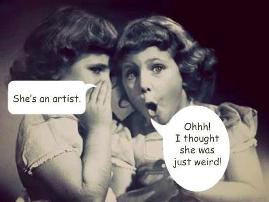 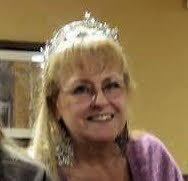 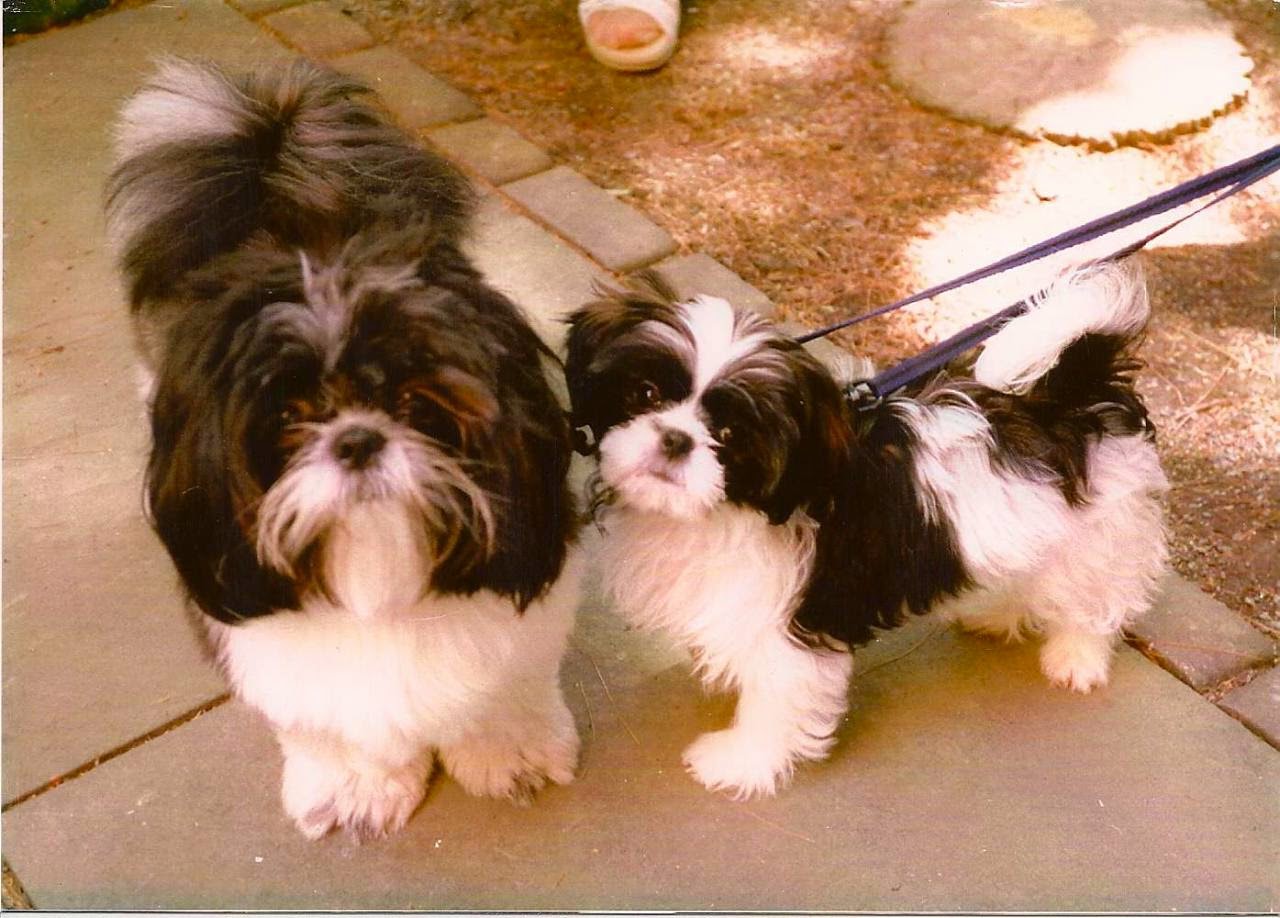 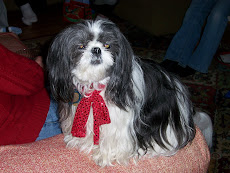 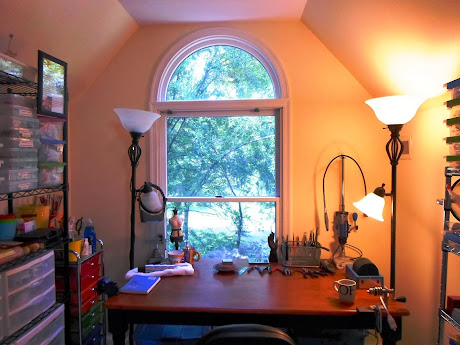 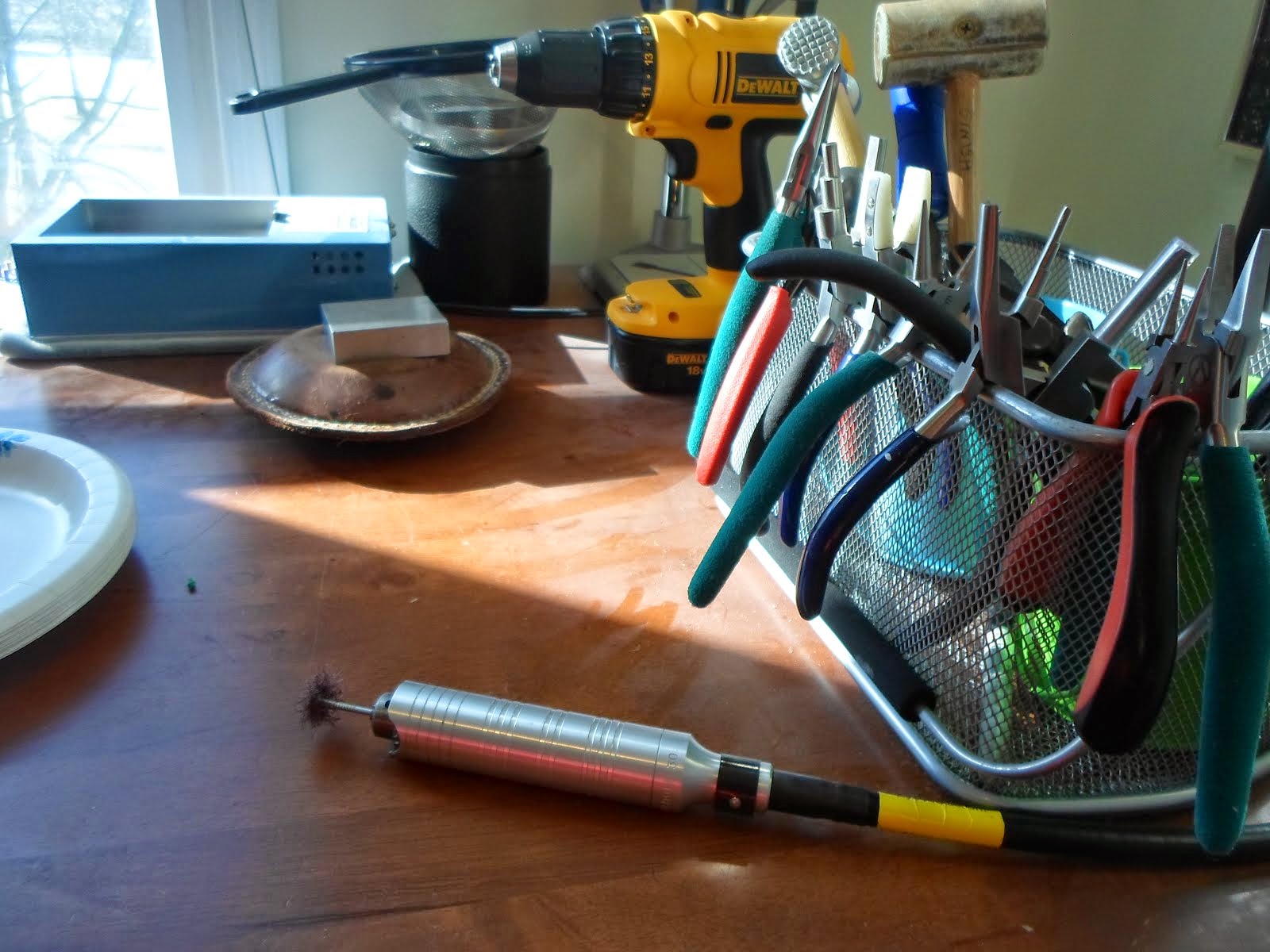 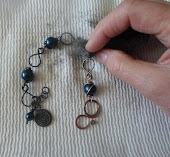